BACKGROUND: On March 14, 2014, the Ophthalmic Devices Panel met to discuss the PMA (pre-market approval application) of the Visian Toric Implantable Collamer Lens. The meeting was of concern to LASIK industry casualties, who regard themselves as victims of the FDA's misguided (and dangerous) review process. According to the victims, and to the FDA's former chief research scientist on LASIK, Dr. Morris Waxler, the FDA ignores relevant safety data in order to approve devices and appease industry. Paula Cofer is an advocate for damaged LASIK patients. The following open letter, submitted by Ms. Cofer, asks panel members to vote against the approval of the Visian Toric Collamer Lens. Ms Cofer notes, "History has shown that once an ophthalmic device receives approval and goes to market, the FDA is unlikely to intervene when problems emerge." Those problems include dry eyes, higher order aberrations such as ghosting, glare, starbursting, halos, and loss of contrast sensitivity, and their emotional consequences, such as depression and suicidal ideation.

I appreciate the opportunity to present my concerns to the Ophthalmic Devices Panel regarding the premarket approval application for the Visian Toric Implantable Collamer Lens (TICL).

My interest in phakic intraocular lenses came about as a result of my disastrous outcome from LASIK eye surgery. Like so many other LASIK patients, I suffer from intractable dry eyes, and my night vision is severely impaired due to my large pupil size. The information I was given about these potential complications during the informed consent process was grossly inadequate. It has been my experience that physicians who perform refractive surgery do not consider these problems as injuries, even though they may have a profound negative impact on quality of life.

Before LASIK there was radial keratotomy, or RK. Although many renowned eye surgeons touted the benefits of RK, most people today consider RK to be a barbaric surgery. The majority of RK patients are back in glasses and many are miserable with their vision.

As problems with RK emerged, photorefractive keratectomy (PRK) arrived on the scene. However, PRK carried risk of haze with deep ablations, limiting the pool of candidates. Pain and delayed healing associated with PRK limited its marketability, and complaints of dry eyes, night vision problems, and regression plagued PRK surgeons.

Next came LASIK, with its flap and zap appeal, and many ophthalmologists were enticed by the easy money of LASIK. Millions of people with blind faith, myself included, were lured by ads promising a safe, quick, and painless way to eliminate their need for glasses. Once again, it wasn’t long before widespread problems began to emerge. Patients who were previously happy with their LASIK outcome were returning with delayed complications, such as corneal ectasia. Problems with LASIK caught the media’s attention, and stories of LASIK disasters, including LASIK-related suicides, begin appearing in print and online. Injured patients contacted the FDA and filed citizen petitions seeking restrictions on LASIK. These events culminated in a 2008 meeting of this very panel, which I served on as Patient Representative, to consider patients’ experiences with LASIK. In response, the FDA announced that it would study how LASIK affects quality of life. Six years have passed with no word from the FDA on the results of its LASIK study. During this period, thousands of people have been injured needlessly by LASIK.

Next down the pike were phakic intraocular lenses, also known as implantable collamer lenses (ICL). They are more commonly known as “implantable contact lenses”, a marketing term used to take the fear out of having a dangerous device implanted inside your eye.

The Visian ICL is placed in the posterior chamber of the eye behind the iris and in front of the crystalline lens. If the ICL touches the cornea, it will damage the endothelium, which may lead to need for corneal transplant. If the ICL touches the crystalline lens, it will result in cataract formation and need for removal of the ICL subsequently with cataract surgery. ICLs also carry risk of glaucoma, retinal detachment, and other serious complications. Furthermore, patients with large pupils are at risk of night vision problems due to the ICL’s small optic diameter, consistent with the pattern seen with other forms of refractive surgery. Unfortunately, the applicant did not assess low-light pupil diameter in this study. I urge the panel to recommend that the FDA require assessment of pupil size for stratification with post-ICL visual symptoms.

Even more troubling, endothelial cell data were not assessed in this study. As stated, ICLs are associated with endothelial cell loss, which is progressive and may lead to need for corneal transplant. In the Visian myopia ICL post approval study, approximately 6% of eyes with data were noted to have significant endothelial cell loss (>30% from baseline) at years 4 – 6 years postoperatively. In a five-minute search of the FDA’s database of ICL injuries, I located a report of a patient who underwent successful ICL implantation who presented 8 years later with corneal edema and low endothelial cell density. It’s important to remember that ICLs are marketed to relatively young patients whose endothelial pumps need to last several decades. I urge the panel to recommend a clear and strong warning in the labeling regarding endothelial cell loss.

What do RK, PRK, LASIK, and other lesser known forms of refractive surgery have in common with ICLs? They are all medically unnecessary. This bears repeating: ICLs, and other forms of refractive surgery, are unnecessary. History has shown that once an ophthalmic device receives approval and goes to market, the FDA is unlikely to intervene when problems emerge. In the context of a medically unnecessary surgery that carries risk to a very necessary organ of the body, the risk tolerance should be near zero. Members of the panel, in light of significant safety concerns raised in the Visian TICL study, I ask that you cast your vote against approval.

Thank you for your consideration.

This person had three RK surgeries and 2 Lasik sugeries on each eye. Needless to say, the corneas were left highly irregular. Refractive surgery of any kind is dangerous enough, but to combine refractive surgeries is extreme. In the case of RK, pie wedges are created in the cornea. Then cutting the LASIK flap literally separates these wedges from the underlying cornea. Are those wedges going to stick together in a way that preserves the prolate shape of the ideal cornea? Are those wedges going to stick together at all? Who could ever believe that this could be done safely?

Image Simulation: Note that the lower lines of the chart are readable, though vision is obviously grossly impaired. 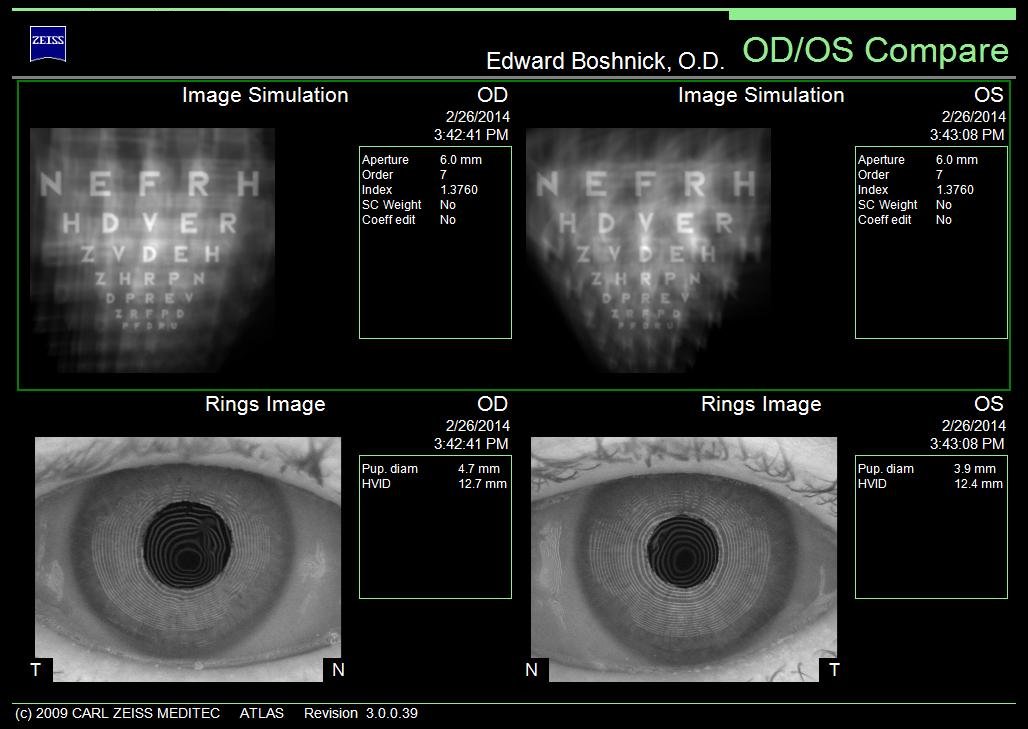 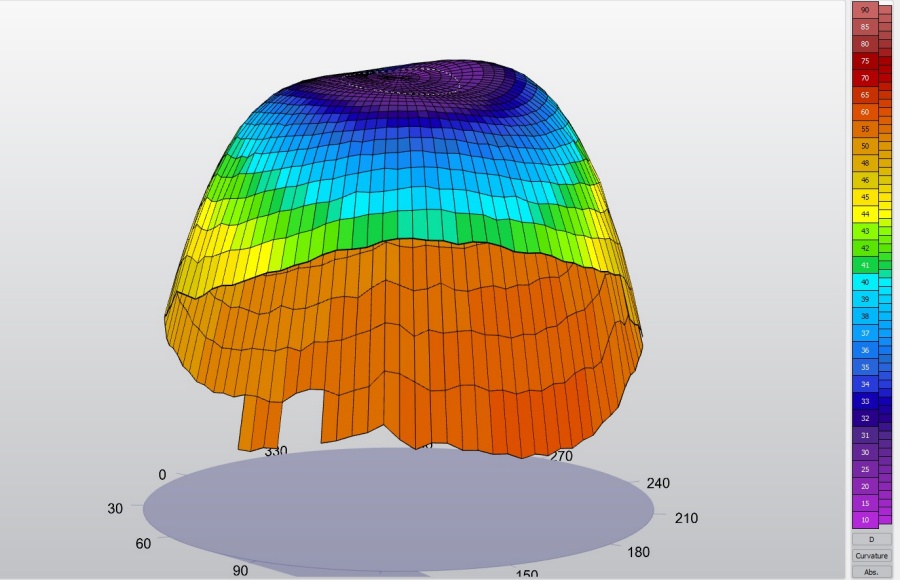 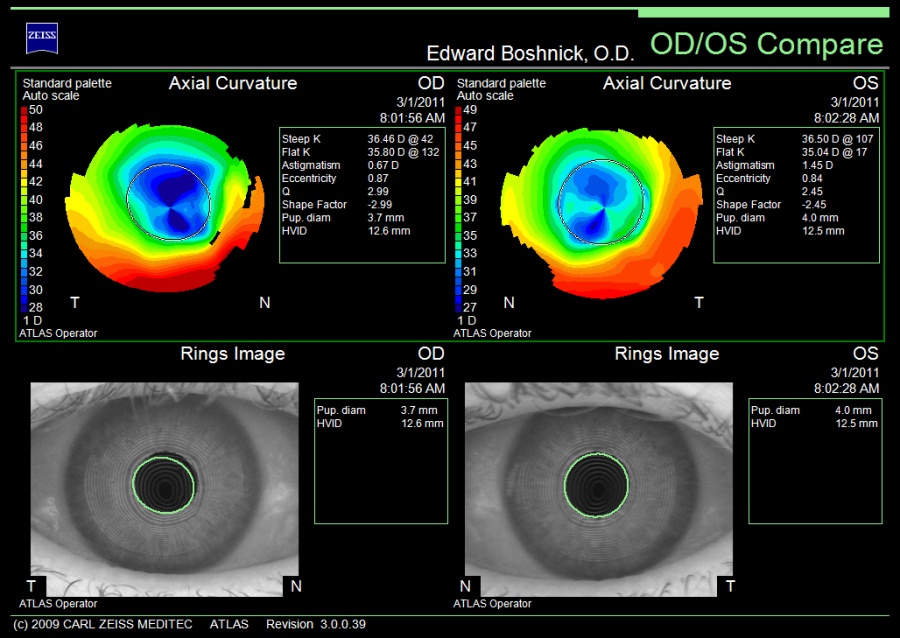 Over the years I have received many inquiries from prospective patients about specific lens designs. Most of the inquiries come from patients who have suffered vision loss due to keratoconus, corneal transplant surgery, refractive eye surgery such as LASIK and RK, chronic dry eye, ocular trauma and ocular disease.

I approach the selection, design and use of these lenses as an art form. What will work well on one patient's eye may not work well on another patient. Each lens technology is a tool or instrument that I use to improve vision and ocular comfort. Within each specific lens design there are fine details that the patient may not be aware of. For example, lenses can be made from different polymers, each polymer having a specific characteristic. Most of our lenses, especially our scleral lenses are made with five or more different curvatures with varying diameters. Any one or all of these lens parameters can be changed as needed during the initial fitting procedure or at any one of the subsequent follow-up visits.

Every patient is unique and has vision demands unique to that individual. In addition, every eye is different. Many patients have lost vision and comfort due to LASIK and R-K. Other patients have undergone corneal transplant surgery and have irregular dry corneas. Yet still others have lost vision and ocular comfort due to ocular disease or trauma. Every patient is carefully examined by me. After this is done, a decision will be made as to what lens technology will be best suited to restore quality vision and comfort once again. It is important to understand that the fitting procedure is a process. After the lenses are dispensed, careful examinations are done on the follow-up visits. At any of these follow-up visits, small adjustments to the lens design may need to be done. It is imperative for both the doctor and patient to have patience with the process.